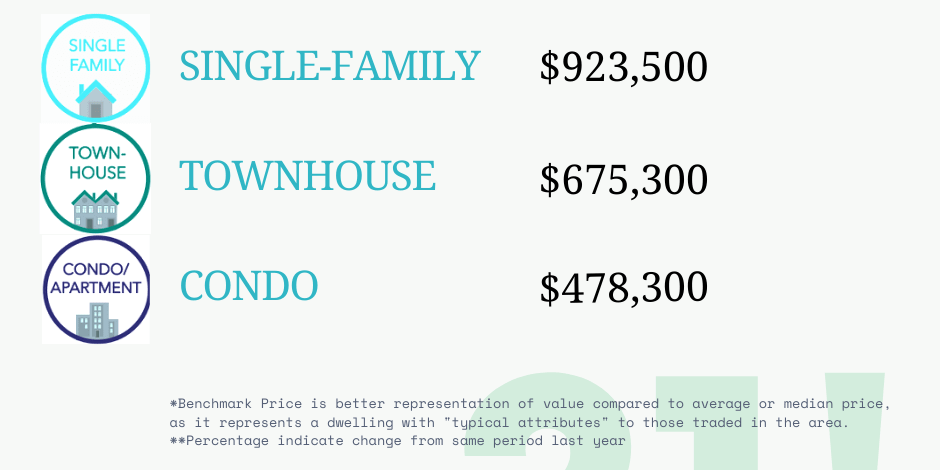 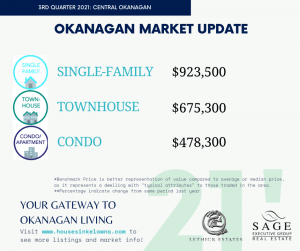 -Single Family Homes in the third quarter had a benchmark price of $923,500, which shows a 27% increase YOY.

-Townhouses in the third quarter showed a benchmark price of $675,300 (30% increase from last year).

-Condos (not including pre-sale construction which was significant) had a benchmark price of $478,300 for your typical 2 bedroom 2 bath unit.

Driving Factors and Trends in the Kelowna Market

One main factor driving prices up, was the consistently low inventory of 484 homes and a total of 717 sales between the months of July and September this year. 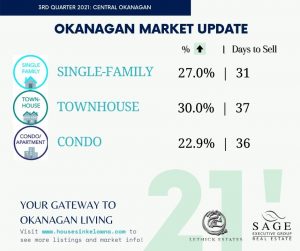 Single-family homes in the Central Okanagan in Q3 were up 27% with an average days on market of 31 days. Townhouses were up 30% and Condos 22.9%, respectively.

The 3rd Quarter stats show us that sales momentum in the Central Okanagan continued strong, despite the increase in leisure travel and activities after months of restrictions and record forest fires this past summer.

Although the 3rd quarter showed signs of monthly slow down from record levels reached in Q2, statistics show the Central Okanagan is still on track for a record year, surpassing the previous record held in 2016.

One interesting trend the region was experiencing in the previous quarter was that of shorter due diligence periods of motivated buyers; and the exemption of important conditions (ie. inspection and financing) in their offers. This trend has continued, however, in lower numbers and less frequency.

The end of summer saw its first month-on-month decline since the pandemic, but year over year, there was still an overall increase of 30.5% from last year September.

According to AIR Stats, the hottest and highest appreciated neighbourhoods in Q3 were:

Chris Chung is a reliable Kelowna agent who brings an analytic yet personable approach to both the buying and selling process for his clients. Drawing from over 8 years of work experience abroad in South Korea and having an education background in foreign language and literature, Chris continues to build a reputation of a local agent who understands both Canadian and Asian cultures. He has the proven ability to work with people from all backgrounds, and believes that cultural diversity and multiculturalism is the backbone of Canadian society. Being born in Canada and raised in his hometown of West Kelowna, he has extensive knowledge of the different neighbourhoods, schools, facilities, and activities throughout the Okanagan. He serves primarily the Kelowna and West Kelowna and specializes in residential home buying and selling, investment properties, and small businesses. Chris received a B.A. in Chinese and Japanese from the University of Alberta. After graduation, he moved to Korea where he worked as an ESL instructor, assistant professor and HR personnel for the big Korean conglomerate Samsung. With his background in foreign languages and education, he now brings his passion to teach his clients about the Okanagan market and buying/selling process while focusing on their needs and wants throughout the entire real estate transaction. No matter where you’re from Canada or abroad, Chris will be able to help you with all your real estate needs and more.

Kelowna Named The Best City in Western Canada for Property Investment in 2020
November 24, 2019